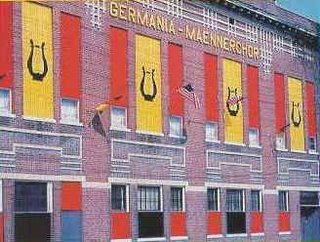 I had an interesting weekend. I went to a German Beer festival, a racetrack and the last summer social of the year.

My future father-in-law (FFIL) was in town to visit his daughter, and I guess to a lesser extent, me. I like my FFIL. He is an outgoing guy that likes to talk and have fun. But, it goes beyond that; he will talk to anyone and has no shame. He is a pod (Seinfeld reference). It is amazing. I like being around him, which is a good sign.

Friday night, the three of us went to the Germania Männerchor. It is a fraternity of sorts that encourages the preservation of old German culture. There are a lot of people of German descent around here and this club has been around to help connect them and show-off all things German.

The Volksfest is a huge event in Evansville. It is a big, glorified beer drinking festival. They serve German food (I had pig’s knuckles) and German beer. There were three German bands in three different areas (a LARGE beer garden, a dance hall, and the club room). It is perfect for large groups of beer drinkers to gather to make ein Prosit (a toast) and have Hergemütlichkeit (warm fellowship – loosely translated). I don’t know how many people were there over the three-day festival, but seats were a rare commodity.

As we went into the festival, I paid for the three of us to enter. It wasn’t long till we were in the food line. As we gathered to pay, my FFIL reached into his wallet and discovered no money. He asked the woman taking the money if he could write a check. I thought I was going to die laughing. Here we were, holding the line up and he asked the poor woman who just had glorified cash drawer if she takes checks or “plastic”. I had SOME cash, but not enough for the three of us. It was kind of understood that he was going to treat so I didn’t worry too much about having excess cash.

After getting nowhere with the check idea, she told him that we could put our plates on the side while he ventured off to find an ATM. He countered with, “how about I give you my driver’s license while and I will go after the meal so we can eat the meal while it is hot.”

What could she do? The line was growing behind us. So, we ate and then he walked down the street to get some cash. When he returned, they didn’t want to let him back in without paying again. After some discussion that included, "Look, I owe you guys $24. If you want to collect it, you will let me in. They finally let him in - I guess because they conceded the battle of attrition. My FFIL! He is a piece of work.

LOL That's priceless. Go to my blog and read my good news! :)