Explore Kentucky, I Dare You!

I live in Indiana but work in Kentucky. I am subjected to all kind of Hoosier and Kentuckian nonsense. Maybe I am just biased, but it seems that there is more to make fun of about Kentucky. I will often harp on the drivers there and some other seemingly dimwitted actions that make up the Kentucky mystique. Here is the latest thing that I just simply can’t stop chuckling about.

Kentucky has what I guess is their version of a safe-driving campaign. It is called “Blue Lights Across the Blue Grass.” Hey, I agree that if any state needs one of those, Kentucky sure does. However, if any of you have seen it, there is a commercial on television that has the Earth viewed from space. It is nighttime in the US, but the place where Kentucky should be is a mass of flashing lights. Then, the picture changes to a group of state troopers (or is it commonwealth troopers in Kentucky, I don’t know). These officers are standing there, acting bigger than life – you know, the attitude that causes the average Joe to dislike them, and one of them tells the TV audience that they will be patrolling a lot and writing a lot of tickets. “No excuses, no exceptions,” I think is the motto. 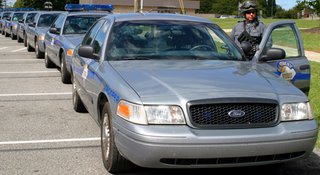 It seems to me that the public perception of the state police is not that great in the first place. Most people have the impression that all they ever do is cruise the highways looking for that terrible person going 59 in a 55. While people are being shot in our cities, the state police officer is busting someone for not wearing a seatbelt between a tobacco field and a seed corn retailer.

DISCLAIMER: This opinion is not necessarily MY opinion, but my understanding of public perception. ;)

Okay, the state troopers are tough guys and no one is going to speed on their watch. Fine, I get it.

However, the next commercial sometimes is an ad for some Kentucky theme park, or sporting event, or even a business in the area that happens to be located in Kentucky. It seems that every time I see these commercials, I hear a phantom “No Thanks,” I will stay on this side of the river. There is one commercial from Kentucky that the spirits seem to have a different response, though. It is one from the Kentucky Tourism Commission that urges folks to discover Kentucky. The phantom response I hear then is just laughter.

LOL! I drove through Kentucky while trying to get to Michigan. Georgia is another state not to mess with the cops in... Thanks for the comment on my blog. I am glad that I am not the only one having issues... Tawnya

I found humor reading this since just about anywhere you go there are things to make fun of about a neighboring state or another city within your state or from one college to another.

I thought about commenting on a number of other posts, but didn't want to litter too much Fear And Loathing In The Blogosphere here and there.

Do you have a spot for a link exchange?