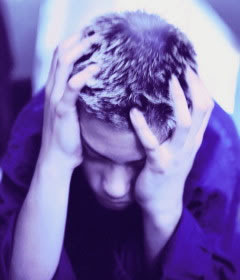 This is probably the most searched post I have written. The searches: depression, wife's depression, selfishness and depression. There are a lot of people struggling out there with depression or their spouse is. Either way it is a horrible ordeal to go through. No matter what I came up with originally when I published this post, I consider myself more of an expert about it now, because now I see depression from both sides - as a helpless spouse of a depressed person and someone who is/has been so depressed myself that I wonder if I can handle even another breath.

I am reposting this with some additions and perhaps some editing. My new perspective on it mandates this.

Who can figure out how a normal person, for no apparent reason, can transform into someone who is one breath away from dramatically changing the lives of everyone around them? Like putting on a costume in the play of life, the character is transformed into a hopeless shell of a human being. It is enough to make Stanislavsky proud.
Depression is a form of selfishness. Am I saying that it isn't a medical problem (i.e. chemical imbalance)? No. For some, it very well may be. It is still selfishness, because by definition, a person dwelling in a state of depression is consumed with the self, although it is not a conscious choice of selfishness. Depression is so debilitating that it leaves one with the notion that he has little choice but to be immersed in the self for survival's sake. Whether it is chemical, spiritual, or situational depression, life seems so hopeless. That is why merely surviving is center-most in the thoughts of those struggling with this.

The problem with depression is that it is a disease of the soul. The soul is the intellect + will + emotions of an individual. Depression attacks the soul and causes the person to dwell on the self. There is an old saying, “Misery loves company.” Depression flies in the face of that bromide. Rather, depression is a suspicious spouse, or a jealous best friend. There is no room for anyone else to suffer with it or any other problem, for that matter. No, one with depression can only consider his/her own hopeless state. No one else has the right to have it, lest some focus may be taken off the self. It really can be brutal in the mind of the depressed, "I don't want to hear about your problems; I am dying over here!"

I never grappled with real depression until after I met my wife. That is not to say that, previous to this divorce, my wife caused my bouts of it or that my marriage was depressing me. However, this divorce has shattered my world and has lit up the world of depression like no other time in my life. Despite my blog rants, I learned to be somewhat contented with my marriage. I didn’t really blog about the good times so much. The troubled spots are easier to analyze and that is what I do, but I digress. Before the past couple of years, I never actually had to deal with depression. Sure, I had sad times. I was sad when appropriate, maybe even downright despondent, but there were always reasons. It was part of the natural cycle of being human in a fallen world. However, depression is another matter. Depression is its own entity. Now, I have stared it down and my spirit screams in horror with the sight.

Perhaps my small (and they were relatively small) stints of depression were a form of sympathy pain for my wife. She has struggled intensely with this unnatural despair. Maybe God would have me get some doses of it so I could understand and reach out to her instead of doing what my flesh craved at times which was announcing, “I can’t deal with this; maybe you aren’t ready to have this kind of relationship.”

How prophetic that last paragraph was when I originally wrote it! I have had a couple of conversations recently with my wife and she marveled at how I understand her now. I think that was the crux of her unhappiness with the marriage. Now, it is just ironic. I have come to find out that irony is just another word for cruel, VERY CRUEL joke.

Whatever the reason, these dates with melancholia are a reality for me now. However, no matter how it feels, complete hopelessness will never take hold. I have found the secret, and I thank God for that revelation. The spiritual aspect of depression did find out that secret, and as some of you have read before it was removed, I have struggled with the God aspect of this divorce. Still, God has been educating me and I have moved from that position (of being mad at God) quite a bit.

This whole situation has also educated me about my wife's spirituality. That makes it all the more depressing. I KNOW that God will and is delivering me from this - that I will someday be alright and whole again. The pain is just normal and necessary. Walking in the fires of depression will polish and proof me. However, my wife doesn't have or is unable to see it that way. For her, it is completely black and hopeless. For me, right now, it is merely a temporary darkness - no matter what it feels like. There may be only one set of footprints in the sand, but I DO know exactly who made them.
11 comments:

I Knew the Risk when I Bought the Ticket I received an email from a person that reads my blog. It was apologetic in nature, although I am not sure this person has anything for which to apologize. Still, I appreciated the sentiments in the email. The reader then vowed to not send anymore feedback unless I asked for advice. This stimulated my thinking trying to realize what I felt in regard to the whole blogging relationship and what goes on with bloggers and readers. I think there is an understood dynamic there that states that the blogger blogs and the readers comment. The vow of "silence" seems a bit out of place, although I appreciate the gesture. I do think that people should follow their own preference.

At any rate, here is the edited version of my response. I am including it as addendum to this comment I left two posts ago:

"I know some of you mean well with your tough love approach. However, to be quite honest with you, there is an appropriate time for that kind of help and it is usually after an appropriate grieving period takes place.

I promised myself that I wouldn't take it personally. That is why I removed those posts. However, as I am still working through it, I am sure I am going to post more of what is exactly on my mind. That will also include any feedback to your feedback. If it offends, do like me and don't take it personally. Depending on how life is for you now, you should be able to handle that better than I can.

In addition, the man up and get over it thing is filed away. I understand the point of view. Try this: wouldn't it be nice to think that you might be married to someone who takes his/her marriage as seriously as I do? Just a thought."

The following is just a follow up that was inspired by the email I mentioned at the top of the post:

What I want to say now is not meant to be accusatory in nature. It is a general statement about how I feel about some comments that I have read not anyone's particular comments, per se. I am really not interested in who said what and I am not really sure about it now, anyway. This may not even apply to you at all.

I don't mind comments. I don't even mind advice. The only thing that hurts is advice that sounds cold and unhelpful. There is an old bit by comedian Steve Martin. He states, "I can teach you to have a million dollars and not have to pay taxes on it. First, get a million dollars."

Some "advice," in particularly the "man up" - tough love advice, is just like that. Sometimes, directions to a destination must start out with "you can't get there from here." This is one of those times. The "man up" advice just perpetuates to someone who is struggling and already feels like a failure to feel EVEN MORE like one. It tends to make one remove everything from the whole conversation because even more feelings of failure just can't be endured at the moment.

However, there are other comments that are encouraging and supportive. Even though no solution is offered, the "being there" feeling is sometimes enough to get someone through another minute in the day. Sometimes, that is all one can hope for.

I also want to thank Jaquandor (who was not the emailer in question listed above) for reminding me of the value of REAL blogging (my term, not his). He even gave me an award for it. Thank you, Jaquandor.
9 comments: