Where there is smoke, there is Mel Gibson 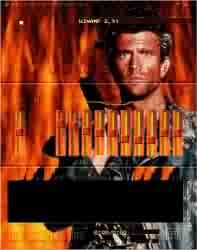 This morning was interesting. I am out on my daily run around 5:30 when I smell smoke. I didn’t think too much of it at first. In my running workout (anything over a walk is a workout to me, btw), I work at different intensity levels. As I was trying to push it to the next level, I just gave out. The strange thing is that I was feeling pretty good at that point and the fatigue or whatever just hit me all of the sudden. At any rate, it caused me to stop and walk so I took the next road (not planned) to circle around back home (to prepare for the weightlifting part of my workout).

SIDENOTE: If you hate parentheses, you probably don’t want to read my blog. ;)

As I walked down this unplanned street, I noticed smoke coming from a garage. So, at 5 something in the morning, I knock on the door to the house and was greeted (and I use the term loosely) by a gruff man that was in no mood for visitors. He was awake already, thank God, but he looked a little suspicious of me. When I showed him the smoke, he thanked me and ran to his garage. I didn’t stick around to see what the deal was. Maybe it was because he was a macho-type guy that looked like he didn’t need anyone’s help or maybe it was because he was particularly unfriendly toward my intrusion, but I decided to continue on my way.

So, I may have saved a life, saved some property, or I could have just bugged someone for nothing on a peaceful Tuesday morning. All I know is that for some reason I unexpectedly went down that particular street. I may never know the end result. I hate my curiosity, sometimes.

Speaking of Mel Gibson (how do you like that transition?), I don’t know what to think of his whole situation. He gets pulled over for DUI and apparently talked disparagely about Jewish people. Now there is some kind of charge about a police cover-up because the anti-Semitic comments were not on the original report.

One thing at a time:

1. I am disappointed that Mel drank and drove, though not particularly surprised. It happens. People talk about how Gibson is supposed to be religious and stuff, but still. Catholics do not preach against drinking (compared to say, Baptists). Drinking happens and bad judgment happens (as a result).

2. Gibson’s anti-Semitic comments are troubling. The world is in bad enough shape without groups hating on other groups. He was drunk and usually alcohol doesn’t cause one to say things they don’t mean, it just makes them say things that they wished they kept to themselves. He apologized for his words so at least he knows they were inappropriate. One can debate about the reasons he may have apologized, but that is between Mel and God as far as I am concerned. I see no reason a drunken diatribe needs to ruin a man’s career (as some are suggesting).

3. The cover-up thing is ridiculous. A man can say whatever he wants. What difference does it make to the police officers? They aren’t charged to inform the public about every sentence a celebrity utters. It is just stupid.

Celebrities are under the microscope too much. This sounds like the beginning of a new post. Stay tuned.

Hey, Jeff. Thanx for visiting our modest little effort of a journal.
About Mel, since his father has made no bones about how he feels about the Holocaust, it's not too surprising that Mel mighr harbor, deep in his heart, a few of the same opinions.
As for the rest, way too much reporting is devoted to those who don't deserve it. We await the day media management tumble to this obvious fact.

I live and breath in parentheticals...lol
So I am right at home, and it gives me the feeling of an actual conversation!
:)
Heavy subject...I cant say why he said what he did..the booze? His solid Catholic(Old school mind you) beliefs? I just think it wouldnt be such a HUGE media blitz if the media just STAYED out of it...
Drama ...knee jerk..do damage and then recant..sigh

Mel Gibson's opinions are about as important to me as the rantings of the Norwegian bachelor farmer down the road. Anyone who wants to make this a major event just has too much time on their hands.....a few hours of volunteer activity every week would probably cure their problem and help the world.

On a lighter note, how could you NOT stick around to see what was causing the smoke to pour from that garage?! (and you call yourself curious!! HA!)

what brand of cigarettes does mel gibson smoke