Get Your OWN Life 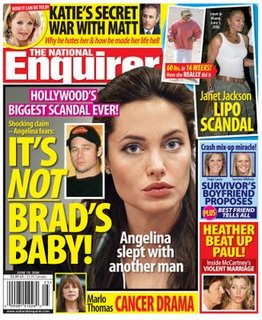 I ended the last post with, “Celebrities are under the microscope too much. This sounds like the beginning of a new post.” Well here it is as promised.

These items are true (or at least reported as being true):

I don't really care about celeb. gossip either. The only entertainer I care about is Amel Larrieux.

Unfortunately, too many people idealize their own lives based on what they believe celebrity lives are...Soap Operas, same thing...people get hooked and then engulfed in the fantasy of it.

Stars are NOT what they were, via media standards. THere are no more Clark Gables, Bette's and Bogies. THe glam and the class have all but disappeared.

Funny you write of this, I was thinking this morn about a Tabloid that had an article in regards to a crappy car a star was driving. I thought, So what! Being a star...has nothing to do with the house, the car, etc...
Just let these people live their lives and bring me good movies, entertain me...thats all I care about.

I could care less! I don't have any magazine subscriptions, I refuse to watch reality T.V., I don't watch the tabloid news shows on T.V... I have enough issues in my own life to worry about let alone care who is doing what to whom..... Tawnya

We are in accord. As we once stated, where they go, what they do, with whom, feh.