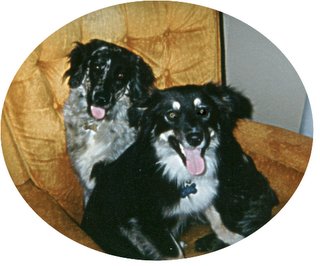 I got Griffey about six years ago. He was part of a package deal that a good friend of mine shared – we got two dogs Taubensee and Griffey. Both were named after Cincinnati Red players. Taubensee I wrote about previously. He is a great dog. This post is about Griffey.

Griffey was a funny dog. He was small and black with tan highlights on his face and white fur on his chest. He really liked to please me and was very energetic about doing it. I taught him a few tricks and he was so eager to please that he often went through the cycle without being asked. He even threw in some of his own “flourishes” (such as spinning on his back feet) for good measure. One of my favorite tricks that he performed was the “creep”. Griffey, on command, would crawl with his front paws with his back legs stretched behind him. It was akin to something you would see Lassie do if she was making a war movie and was rescuing soldiers in foxholes under enemy fire.

Griffey was also very afraid of storms. Nothing I could do could ever get him over that. He would shake and pant at the first rumble of thunder. Finally, he learned to crawl under an end table till the storm passed. He was so very fond of dog biscuits, but couldn’t touch them or even a t-bone steak if he was in “storm mode”.

This dog also had the worst breath. I tried dental bones, brushing his teeth regularly – everything. Nothing helped. His breath could take paint off any surface. And, he loved to share that breath. He particularly liked to breathe in the face of all female humans he came in contact with.

My dog also had a penchant for getting into the trash. He knew it was wrong, but if he was alone with a clear shot at it, it was just too tempting to pass up. I knew when he did it, too. Every time I came in the door, Griffey would meet me there full throttle. He would say in body language, “Hey Jeff!!! You’re home!! Come in, sit down, take your shoes off. Can I get you something to eat?!?!?” He loved it when I came home. However, if he had gotten into something he shouldn’t have, he was off in the corner in his dog bed, still and guilty-ridden. “What did you do?” I would ask sternly. It was usually not necessary to wait for an answer because it was usually strewn all about the floor or on my leather couch.

No one could come close to the property without Griffey warning us of a possible intruder. He would bark and if someone knocked, he would jump against the door and shout for all he was worth. It was difficult to even answer the door because of him – the little knucklehead.

Last week, I noticed that Griffey wasn’t feeling too good. He stopped eating and wouldn’t drink and he threw up what little he had in his stomach. He just laid around without his usual energy. Finally, I decided to take him to the vet last Thursday. The doctor put him through all types of tests and then decided that my little buddy had pancreatitis (an inflamed pancreas). He most likely got it from something he picked up while getting into the trash. He sent us home with a battery of medicines and told me to call if there were any problems. We noticed that he was doing a little better after the vet treatments.

Friday came and Griffey threw up again so I called the vet. He gave me a few more instructions and told me to call him the next day. About 11:00 Friday night, I came in and my sister (who decided to stick around and keep an eye on Griffey) told me that he was doing worse. I checked him out and he was unresponsive.

We took him to the emergency vet clinic. They treated him but the vet told me he had DIC as a complication from his pancreatitis. DIC (Disseminated Intravascular Coagulation) is a disease where the clotting of blood is happening all over the body rather than just at the point of injury or infection. It was getting out of control with Griffey in such a short time. The vet told me that the prognosis was VERY bleak. He said when vets diagnose DIC it means “Death Is Coming”. He said we could hope for a miracle, let him bleed out, or mercifully put him down. We chose to be merciful.

I have always had an underlying contempt for people who ordered the euthanism of a pet. Why would they give up? There I was feeling like a hypocrite for allowing this to happen to my own dog. But he was bleeding out and struggling! I still wrestle with it. Even if the slimmest of chances that the DIC would reverse itself, Griffey probably had major organ damage and still had the pancreatitis that he couldn’t shake even with medication. I decided to let his suffering end in this peaceful manner. I pray that I was right. I will never have true peace about it and I guess that is my scar from this whole ordeal when the pain of Griffey’s death is replaced by only fond memories of his life. I will always carry that scar.

I returned home at 2:00 a.m. Saturday morning with what appeared to be a sleeping Griffey wrapped in a blanket. At 3:00 am, Griffey was laid to rest next to my Dulin, the perfect dog of my youth in my mother’s back yard.

Griffey was a fun dog. He was my buddy. Every time I make a move, I instinctively look for Griffey because he always was ready to go or do at the moment I contract a muscle. Now, there is silence and stillness on the floor and in my heart. 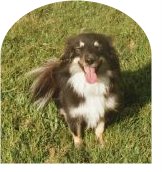 so sorry about your dog. Anyone (including myself) that's had to make the decision feels the same way. We do what's "right" but hate it because of how we feel. It's always the loss of the living.

You did do the right thing--putting Griffey's discomfort ahead of your own. Poor little guy. Hope you're doing better.

It never becomes easy to tolerate the loss of a pet. We have never had to euthanize, but if it became necessary, we would not hesitate to alleviate the suffering of a beloved pet. We grieve with you, understanding the bonds that are formed between stewards and pets.

I am so very sorry. My heart aches for you.

I can really feel your pain, Jeff... In the past year, I have had to put three pets to sleep - 2 dogs and 1 cat. The dogs were very old and were at the point where their organs were failing. They were also in a great deal of pain. I took the first one by myself because my husband couldn't bear it. She looked at me the whole time and just before she went away, I could swear that she thanked me for taking care of her. My husband came for the second one. She was our fur-baby, our practice child. Again, a great sense of peace and thanks from the dog.

The cat was mine from the time he was a baby. He had cancer. When he became incapacitated, I knew it was time.

As hard as it is, sometimes euthenasia is absolutely the right thing to do. I cared for my pets and loved them dearly, and I was there for the end, holding them, petting them, and taking care of them still.

You did the right thing.