Movie Review: "Man of the Year"

I am going to take a break from my weddingmoon and to discuss a movie that I saw this past weekend. I want to do it while it is still on my mind. I always have trouble trying to write about movies without giving it away. However, I will endeavor to do just that.
Actually, I saw a double feature Saturday night. I saw a comedy and a suspense/thriller movie. The comedy was, of course, "Man of the Year." The thriller was . . . uh . . . "Man of the Year." They were both pretty good, however comedy and suspense is usually not a good marriage. It wasn't here, either. 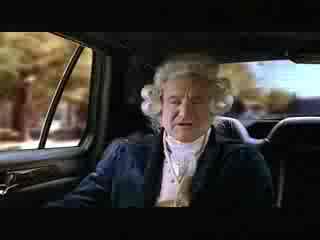 The movie started out as a comedy as Robin Williams character Tom Dobbs, a comedy-news show host, decides to run for president because he is sick of party politics. This part of the move was excellent - especially for me, because I share almost all of the same sentiments that Williams' character does. Plus, as you can see, Williams does a great Barabara Bush immitiation.
Somewhere towards the middle of the motion picture, it morphs into a suspense/thriller. There is intrigue concerning the calculating of the votes in the election. This is a pretty good storyline also. Either movie would have been good on its own. The trouble is that it isn't all that great together.
I was laughing and enjoying the comedy. I wasn't in the mood for the thriller. I wanted more comedy. I reluctantly stayed interested, but I longed for the comedy while the thriller aspects of the piece played out.
I can still recommend this movie, however. I think the message of the movie is important and the intrigue was fascinating. It is too bad that the movie couldn't make up its mind on what kind of movie it was going to be. Either one would have been great. Really, it would have been wonderful if there had been three movies. The process of Williams getting in the race would have been another good movie. In this one, we were ushered into the campaign by Dobbs' manager's (played by Christopher Walkin) narration of the accounts.
I give the movie a "B". There is always room for the "it would have been better if"s in movies. That is what gives us something to talk about and me an opportunity to get off my own nuptual story - for today, anyway.

I think Robin Williams is a very UNDERated actor... They don't always know how to use him.. as wonderful as he is as a comic, he is EXCELLENT in very deep, serious roles!

I love Robin Williams.... I wanted to see that movie and now I think I will... Hope everything is good in your part of the world.... Tawnya