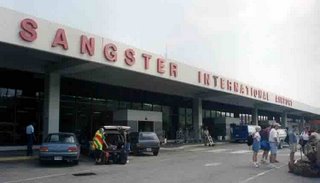 When we arrived in Jamaica, the experience at the airport in Monteray Bay was only slightly better. The air conditioning was out so it was uncomfortable waiting in the "immigration" lines. In Jamaica, they open and examine all your luggage for plants and things like that. The people were a little kinder than those in St. Louis, however. And, the most important thing, I wasn't singled out as some kind of criminal-in-training.

After getting past all the hub-bub of airport beuracracy, we found the Sandals desk. There, they escorted us into a hospitality room where food, drinks and plush furniture was provided for Sandals guests. We waited there till our shuttle to the resort was ready (only about 5 minutes). Guys took all our luggage and loaded it without being asked. A modest tip later, we were on what appears to be the only road in Jamaica (tic).

The ride to the resort was very adventurous. First of all, in Jamaica, they drive on the left side of the road with the steering wheel in those vehicles being on the right side. It is totally opposite of the US and I guess the same as Great Britain. Even though there are posted speed limits, no one observes them. There is a constant flow of passing cars on only two lanes. There are no "no-passing" zones or else they are ignored. Our ride was chocked full of close calls involving head-on collisions. Miraculously, I didn't see any accidents. They are used to this kind of driving and do it well enough. Our driver was a speed merchant and dare devil. Yet, he makes three round trips a day from the airport to Ochoa Rios and never gets in an accident. It is amazing.

People tend to congregate on the road in Jamaica. We must have seen hundreds on our 67 mile trip. There are goats running around and various large birds (that I found out later were buzzards). What struck me the most was the poverty among the people. Little square shacks housed families. These families are walled out of the most beautiful beach fronts in the world so rich (and lucky) Americans can c0me and take advantage of Jamaica's most precious resources. I have to admit that it made me feel a little guilty. Others rationalized that the tourists were the reason there was an economy at all in Jamaica so these peasants are grateful for the set-up. Maybe so, but the exclusiveness of the system still haunts.

My husband worked on a golf tournament in Jamaica and had a lot of the same observations as you did. The poverty struck him just as strongly.

In the evenings when work was over, he went out in search of "local flavor", landing in a restaurant/bar/shack on the side of the road frequented by the natives. He spent much of the evening talking to an old man. When it was all over, the old man didn't ask for money - he asked for shoes. He said my husband should come back sometime and bring shoes...

Interesting what other people value - and it gives quite a perspective on our own.

It sounds interesting... So I guess those Jamacan Rum commercials are wrong about the traffic jam with the bus and bike? Tawnya

The tourists are "walled off" from the poverty everywhere I've travelled. Maybe it's to protect the citizens from the tourists....