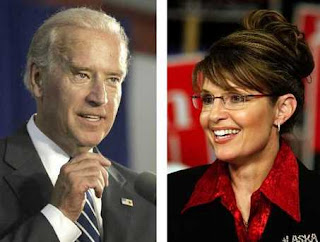 I just watched the vice-presidential debate between Sarah Palin and Joe Biden. It was interestingly boring. Who won? Well, if one considers a progressive evaluation principle (compare to: tax, progressive), you might consider Palin the winner. If you scored it on a point by point, Biden won.

Sarah Palin looked good if you look at it progressively, that is, if you expected her to fall apart as she has in other media situations. She just didn't. Therefore, she looked better. It is as if you have kid on the baseball team that always strikes out. If the kid actually grounds out to the pitcher, it looks like he did well - when in fact, he just made another out.

What bothered me about her? It appeared as she just read a speech, complete with jibes and sound bites. It didn't matter what was asked, she just continued with her speech. As a matter of fact, she admitted early in the speech, uh . . . I mean debate, that she wasn't going to answer the questions the way Biden or the moderator wanted. That translated into she wasn't going to answer it at all unless it happened to be in her prepared speech. That and announcing that she wanted more power to the vice president made her appear to lack humility.

What about Biden? He tended to be boring. He also tended to answer the questions so that to me, gives him the debate. He correctly pointed out that George Bush ran the country in the ground, and McCain's main policies are the same. That is enough for me. When challenged about "looking back and not looking forward", he correctly reported what I care about which is, "The past is a prologue to the future."

He did bother me that he tended to smile, kind of patronizingly, at Palin when she went reached the attack part of "her speech". I don't know what he was supposed to do, but that bugged. He also liked to repeat what he considered main points - even going as far as begging, "Let me repeat, . . . ".

All in all, the debate was kind of boring to all but the political junkies (like me). It just reinforced what I had already come to believe about this election. We can't risk anything close to what we have now in the next administration.

I had planned to watch the debate last night, but when 9pm finally rolled around, I was so tired that I just went to bed. From everything I've heard, I didn't miss much. The bit about Palin not answering questions makes me wonder if she actually understands what the word "debate" means.

Biden may not be exciting or new, but he does what he's supposed to do and supports his candidate by actually supporting his platform and not by flattering him. That makes Biden a much better VP candidate to me...

I did record it on the DVR and will probably watch it sometime this weekend.

Good to see you back, Jeff!

Yay! Jeff is back among the living. I don't like either one of them, really.