This is my snarky take on the GOP nomination derby.  Although some of it is tongue-in-cheek, if you look hard enough, you may find the substance. 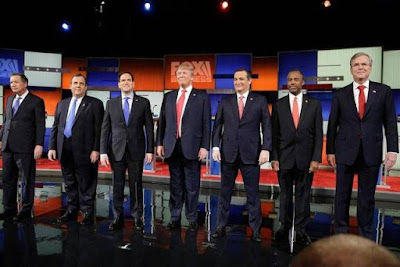 The 2016 nomination derby might be the most interesting in history.  The Republicans boast of a virtual herd trying to position themselves to face-off against the Democrats in the fall. For the sake of time, space and interest, I will only touch on a few that many think have a chance. I will spend the most time on the overwhelming front runner because it is important to understand what currently has the most support.

Mr. Trump is a fascinating candidate.  What is more fascinating than his candidacy is the fact that he has so much support.  People like to be mad and Trump gives them an opportunity to represent their anger.  He gives them an outlet for the "It's simple folks; we just have to keep Mexicans and Muslims out of the country and we will be fine" camp. Trump gives the "we against them" drive a place to light. He also just tells them that he can make all the deals that overwhelmingly favor the US and the other countries will go along with it.   Trump tells the masses that everyone in Washington are idiots and he is the only smart guy around that can save the country.  For whatever reason, they believe him.

Let's look at his specifics - that which we can find:

In summary, we don't know that he has the best interest of the citizens.  He doesn't operate with principles because he brags about how he gamed the system as a businessman.  He doesn't have the ethical backbone to do what is right because if he had a penchant for ethics,  he wouldn't have gamed the system for personal profit.  There is no reason to think that he is influenced by ethics at all but by only what makes him successful - and success is defined by him.  He is just too dangerous to trust with the country's welfare.

He also doesn't seem to understand that there is a difference between a business deal and a deal made by countries that have other agendas besides profit which often implies the intricacies of diplomacy and the relationship with allies.

Finally, I don't think he takes the quest for the White House seriously.  It is like a hobby to him or a sporting match.  He is obsessed with his poll numbers rather than being concerned about pursuing a harmonious country.  It makes me worry that he believes it is okay if we all lose, as long as he wins.

No one likes Ted Cruz except people who do not understand what governing entails.  These are the same people who also like Trump; it is just that Trump is more entertaining.  When a respected person like Bob Dole said he would rather have the clueless Trump in office over Cruz, that should tell you all that you need to know.  Cruz comes off like a televangelist in his speech and mannerisms which is a turnoff to most people not glued to TBN.

Cruz is the candidate of no.  He isn't as interested in governing as he is obstructing.  If he can't compromise in a republic, he isn't fit to govern in a republic because that is what democracy is all about - giving everyone a voice and a choice.

In addition, it turns out that there is a legitimate concern that he may not even be eligible to be president - and I am not trying to be funny here.

He, like most of the other GOP candidates, believes that he is running against Barack Obama instead of his fellow Republicans or even the Democratic candidates.  As Americans, we were scolded by the Republicans if we insulted the president of the United States. To do so, made critics of GW Bush un-American.  Of course, that only applies to Republican presidents, I guess.  To rational thinkers, that seems pretty disingenuous.

Rubio also is against unions at every turn. I am not saying that unions haven't had their faults over the years, but unions are the backbone of labor.  Because of unions, even non-union shops have to treat their workers more favorably.  Killing unions would lower wages and make the wage gap even larger.

Rubio also seems to not have the kind of work ethic necessary to be the POTUS.  The presidency requires someone to be on the job 24/7 including vacations.  Rubio has a poor voting attendance record which is bad enough, but he downplays the importance of it which means he isn't too concerned with carrying out the job that he was elected to do.  Is it really a good idea to elect a president with that attitude?

When considering the others, Jeb Bush seems to be in a daze like he can't believe he is losing.  He spends a whole lot of time bashing Hillary Clinton which isn't going to do him any good if he can't leap over the five or six Republicans ahead of him. He is one of the only candidates that is nervy enough to attack Trump, but that has been ineffectual.  In fact, he has slidden so far now that Trump, formerly his greatest adversary, now ignores him for the most part.

Chris Christie has a hard time telling the truth according to Politifact.  Besides, he doesn't even have the sense to go by his middle name, "James".  Chris Christie should only be forced on him; it shouldn't be his first choice. You have to pick the name that is most flattering.  Let "Chris Christie" go by the way of "Steve Stevens" and "Dick Dixon." At least go with the hip, "Topher." He should put his best name forward. You don't see Barack Obama going by Hussein or Barry now, do you? James Christie sounds a lot more presidential to me.

Rand Paul just can't seem to get any traction.  He has some sensible ideas from his libertarian side, but it also provides some idiotic ideas so that is a wash. He slid his way out of the prime time debate in South Carolina.  Not wanting to be relegated to the "kid's table" debate, he just took his ball and went home.  He might as well stay there.

Kasich has a different attitude compared to the other candidates.  As governor of Ohio, he had the sense and the courage to adopt ObamaCare.  He, like the rest of the field, says he wants to repeal and replace it, but he is the only one talking about preserving access to health care to do it. He states that the Ohio model "provides the path forward to the nation." The thing is, the Ohio model is an expanded Medicaid program - which is also part of the Obama plan.  Be that as it may, Kasich does recognize that it is unconscionable to kick millions off of medical coverage for political expediency.

The other candidates are content to end the ACA and worry about replacing it at some later time (or more likely, not at all).  To illustrate this, the new Congress has already had a repeal bill pass and sent for Obama's veto, which he predictably executed.  With all the hollering of "Repeal and Replace,"  the Republicans have tried to repeal ObamaCare over 50 times without a single replacement offer.  At least Kasich has seen first hand the need and allowed it to be met in his state.

The people of Ohio, who knows him best, love Kasich.  He enjoyed record approval ratings going into his presidential campaign.  This shows the success he has achieved as chief executive in a heartland state.

In addition, Kasich has been the most open to governing instead of perpetuating the feud that has been going on in Congress for far too many years.  He champions a hopeful and positive campaign. He has demonstrated compassion driven by his faith that is determined to not leave "the least of these" behind.  That attitude isn't getting him very far so far in the GOP, "I got mine, let them get theirs" subculture, but it does provide the reason that Psychosomatic Wit endorses John Kasich for the Republican nomination for president.