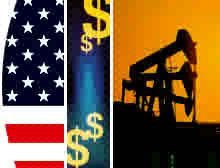 Gas prices are out of control. The Iraq situation is out of hand. The Middle East is as unstable as it has been in my lifetime. Has this administration managed ANYTHING right?

Gas is about three dollars a gallon on average. It was tolerable until the Hurricane Katrina struck. The oil companies uses any piece of news as an excuse to raise gas prices. We have not recovered at the pump although New Orleans and Mississippi are seem to be improving.

The Bush administration doesn't seem to much care about it. I guess I wouldn't either if my buddies were in the oil business. If my family ran a bar and grill, I guess I wouldn't crusade for tougher policy on alcohol sales. When the country's energy task force takes its cues from the major oil companies, guess what is going to happen? I wish the president would just recuse himself from the presidency - citing conflict of interest.
The oil barrons claim their hands are tied about the supply and refinement of oil (that affects the price), but somehow they are making record profits. It is said that they aren't making the money from gasoline aspect of their business. I say that there is no such a thing as coincidence.
People claim that we are getting a better deal in the US because in England they are paying around $7.00 per gallon. Before people get excited about the oil companies here, they should know that the difference in price between the US and the UK is on taxing. The UK has a 75% tax on fuel. They actually pay less per gallon on the fuel than we do.
It is really simple. We are not Europe; we are not used to paying 200% more in fuel prices. It is taking a toll on the economy. Businesses rely on transportation of goods and services. They will pass on the additional costs to the consumer. As a result EVERYTHING goes up in price, not just the cost at the pump. The Bush Administration needs to get its head out of its arse and revamp its energy policy. The first step is to get rid of its self-serving advisors.
Since chasing our tails in Iraq, we have 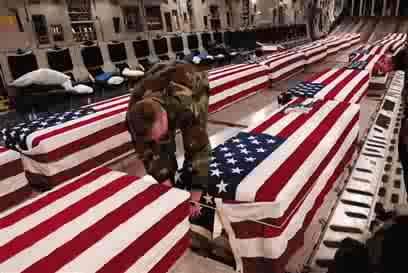 lost over 2500 American lives. Contrast this with the 3000 lost during the 9/11 terrorrist attacks, and it is starting to become a wash. When you factor in the estimated 40,000 Iraqi civilian lives lost, invading Iraq seems to be one of the worse decisions any president has ever made.
Here is what we know:

I have no qualms about going into Afghanistan after 9/11. I don't even begrudge the "we thought there were WMD's in Iraq" excuse. I just don't think it warranted an invasion at the time. It seemed that we had bigger fish to fry. We certainly have bigger fish to fry now (Iran, N.Korea, and the war building between Israel and Lebanon and potentially Syria) over the Shiite-Muslim Hezbollah attacks. Yep, we could use a fresh military and the resources to help manage these situations, but our fish fry has run out of oil (no pun intendeed).

Rant on!!
I've never seen such ineptitude in higher office!
Scares the crap outa me......