There is an article in my local paper about an Evansville, IN police officer getting cleared for killing a family pet. The whole story would be laughable if it were not so sad. It is especially sad for me, because I am a sucker for animals - particularly dogs (if it has gone unnoticed).
The police officer was searching for a girl that was reported to be abused by her boyfriend according the girl's father. As this officer went around to the back of the house to catch anyone trying to sneak out of the back of the house, he was confronted by the dog. To protect himself from harm, the officer shot the dog in self-defense.
The owners of the dog made a complaint with the police against the officer, but the officer was cleared of any wrong-doing. So far, anyone would agree with the ruling. At this point the story sounds sad, but not extraordinary. Examining the circumstances a bit further changed my perception. 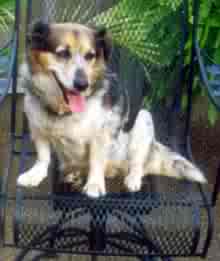 According to her owner, the dog "Precious" was no threat. She was a 13 year-old beagle-bassett hound mixed that tipped the scales at whopping 18 pounds. Is it any wonder the officer got his service revolver out in time?
Wait, there's more. The dog was in poor health with cataracts in both eyes, was nearly deaf and was restricted by being attached to a cable. Not only that, but the city of Evansville wrote a check to the dog's owners for $17,500 to settle a civil case brought on by family. Seventeen THOUSAND, five hundred dollars for appropriately killing a dog in the line of duty! That is a lot of Milk Bones!
Precious, AKA Killer
According to the article in the Evansville Courier and Press, a national representative of the Humane Society in Washington D.C. stated that it was the largest settlement that he has heard of in a case involving a dog.
I hope that the brave officer is on less hazardous duty now. Maybe he can keep the parks cleared of the perverts in the public restrooms. Nah, that is no good, there are too many squirrels.