Should Christians Call for the Death Penalty for the Boston Bomber? 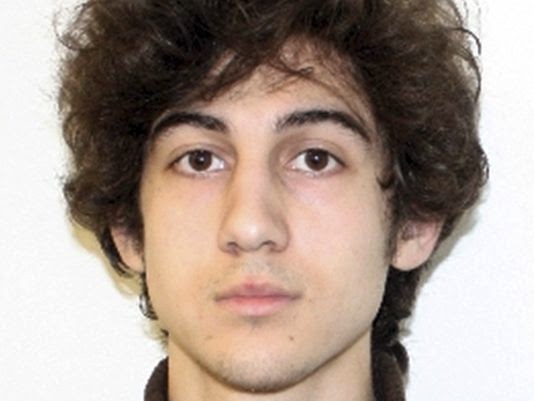 Recently, I read and reviewed Unoffendable, by Brant Hansen. Written from a Christian point of view, it deals with anger and, of course, being offended. You can read the review in the previous post. In it, Hansen talks about the MYTH of righteous anger and how it has no place for a follower of Christ.  I wondered in light of the Boston Marathon bombing and the guilty verdict that was reached against Dzhokhar Tsarnaev, how this “righteous anger” principle applies when considering the concept of capital punishment – especially for the Christian.  The trial is in the sentencing phase so I think this is a timely topic. The issue now is whether Tsarnaev should be put to death for his part in this horrible crime.

When people think of a capital offense, this surely would be a good fit. Tsarnaev and his brother used pressure cooker bombs to destroy the lives of race participants and a crowd of onlookers.  When the smoke cleared, three people lost their lives and 264 people were injured - some very seriously including the loss of limbs.  Yes, it stirred up a great deal of anger from all over the country and the world. Here are some examples of that anger that I picked up in news stories and comments:

“Fight the good fight prosecutors and give this child-murdering Islamic terrorist the death penalty he so richly deserves.”

“Just kill the scum and get it over with Boston”

“So the Boston bomber kill 4 and injured over 200 and we are gonna give him a quick death? If it was up to me I would water board him”

Christians like to look at the New Testament instead because it is about Grace.  Christ fulfilled all the rigidity of Old Testament rules and laws and if we hitch a wagon to his star, then we can rest in that Grace.  So shouldn’t we also extend that grace to others?  Should not that be our model? Does the new Testament support the idea of capital punishment?

The simple answer is no. Christians like to point at a passage in Romans that tells us to be willingly subjected to government authority. The other passage is one in Acts where the apostle, Paul, subjects himself to government authority even if it means his death.  Nowhere did it say that capital punishment is right and just under grace.  If Christians use this verse to justify their clanging for capital punishment, then they also have to admit that slavery is justified also because it is a comparable element under the law.  Just because Roman law had the authority to put prisoners to death does not mean that the practice was endorsed by God. Only the authority of the government was endorsed.

Getting back to Unoffendable, Hansen doesn’t discuss capital punishment at all but here is what he did say:
“(Vengeance is) His, and it makes senses, too, that we’re not allowed vengeance. Here is one reason why: We stand as guilty as whoever is the target of our anger.  But God? He doesn’t. . . . Whatever anyone has done to me, or to anyone else, I stand just as guilty. People have lied to me, but I’ve lied too, People have been unfaithful to me, but I’ve been unfaithful too, People have hurt me , and I’ve hurt them. I get angry toward murderers, and then here comes Jesus, telling me if I’ve ever hated someone - and I have  I am the murderer’s moral equal.”

Does this concept not ring familiar?  In John, chapter 8, the Pharisees and Scribes brought a woman to Jesus. She was caught red handed in the act of adultery.  The law was clear.  This woman was to be stoned.  Jesus told them that whoever was without sin should cast the first stone at the woman.  The Temple officials departed.  Since all of the accusers left (because they were not clean themselves), Jesus pardoned her.  Keep in mind, Jesus was the ONLY one that had the authority to cast that first stone.  He chose to extend grace, instead.

How then can Christians be for capital punishment?  Where’s the grace?  I am not saying that horrible offenses shouldn’t be addressed.  There are many reasons that, as a society, we cannot allow the offenders to walk freely on the street.  However, doesn’t the death penalty take that concept too far?  Apparently, Jesus thought so.

Jessica Kensky and Patrick Downes were recently married. They each lost a leg during the Boston Marathon bombing.  They made this statement regarding a potential death sentence for Tsarnaev, “We must overcome the impulse for vengeance.”

Also Jennifer Lemmerman, the sister of an M.I.T. police officer who was killed by Tsarnaev, said she thought that the death penalty would bring neither peace nor justice. She wrote on her Facebook page, “Whenever someone speaks out against the death penalty, they are challenged to imagine how they would feel if someone they love were killed. I’ve been given that horrible perspective and I can say that my position has only strengthened,’’

I don’t know if Kensky, Downes, or Lemmerman are Christians, but they sound more like what I would envision someone being influenced by Jesus Christ, rather than those with torches and pitch forks that tend to shout some modern day version of, “Crucify Him!”

Confirmation bias is real, and though Christians aren't the only people who do it, so many of them are masters of it.

In practice, questions like these never boil down to what the Bible says should be done. It's always about finding that one tiny excerpt that makes you feel like the thing you want to do is justified.

There is a misconception that people derive their values from scripture, but the truth is that it is more often the case that they insert their values into scripture. --Resa Aslan