Saturday Night at the Catholic Shindig 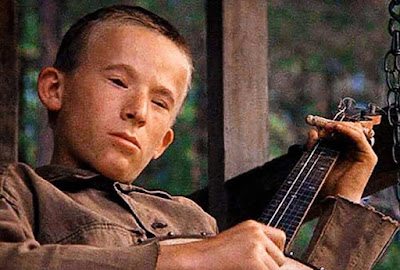 Looking down at my Fitbit, I knew I had a number of steps to go to reach that 10K bench mark, so I decided to head down to the neighborhood Catholic Church.  You see, it is summer social time in Evansville and it was the local church's weekend to prosper.  That being the case, I put my walking shoes on headed to the parish to see what they knew.

As I got closer to the campus, I started to hear "Dueling Banjos" fill the air. Ah, live entertainment! I was hoping to see that weird looking kid play from Deliverance, but I knew it was a long shot.

Finally, I pass a sign signifying the summer social for Annunciation Parish at Holy Spirit.
I confess the sign irritated me a bit.  I am not a fan of change and for as long as I could remember it was just known as Holy Spirit Catholic Church.  But for some reason, they had to tack on the prefix of "Annunciation Parish" to the moniker.  It reminded me of all the universities that started naming their basketball floors after someone - such as Arad McCutcheon Court at the Ford Center.  However, to me, the court naming made more sense, but I digress.

It didn't take me long to confirm my suspicions about "Dueling Banjos."  The weird looking kid wasn't playing. Instead it was one seasoned guy playing an acoustic guitar.  The banjo was apparently recorded . . . so maybe it was the weird looking kid.  I will just believe it is for peace of mind.  (On a side note, that weird looking kid in Deliverance didn't really play the banjo at all.  He was just chosen to play that part because he was . . . well, weird looking.  There was actually a REAL banjo player that was behind him that reached around him and played the banjo.  Not kidding.)

Getting back to the shindig, it was different than the summer socials of Holy Spirit's past.  There used to be rides and gambling and a huge rummage sale on top of the food booths and Cafeteria plates.  There also used to be BINGO.  Not this year.  No rides. Just a couple of  food booths, plate dinners, but no gambling.  New things consisted of a bierstube and an inflatable play room for kids.  I was hoping the two wouldn't intersect.

There was light crowd there.  I felt like I stuck out being there alone and not really doing anything.  It was that "lonely in a crowd" feeling that we get from time to time.  As I was scouting out a food booth, this man came up to me.

"Do you remember me?" he asked.

It hit me (not the man, but from where I knew him), "You played for me in little league!" I announced.

I can't believe he recognized me from all these years.  Brian, my left-handed first baseman - the best player on that particular team was a sight for eyes that were sore from being a stranger in my own neighborhood.  He introduced me to his wife.  I told her that I was her husband's little league coach and to not be fooled by the fact that he looked older than me.  She laughed, but kind of agreed.

It was nice to run into another former player of mine.  It happens a lot and they always seem generally happy to see me.  Some are even more than happy to see me, but perhaps that is a theme for another time.

I told him that I would let him eat his tenderloin sandwich before it got cold.  I walked away thinking about Brian, the church, and that tasty-looking sandwich.

I walked around a little more, trying to put some more gratuitous steps on my Fitbit when I saw an older man with a black shirt and a white Roman collar.  I didn't need to be at a Catholic church to know who that was.  He looked at me and shared a friendly greeting.

"So are you the guy I talk to if I am thinking about converting?" I asked thinking that would be a good ice breaker.

"No, I am just visiting," he replied.

"Well, you are the only one in uniform so I thought I would give it a shot."

He replied, "Well, you can come and visit here and they probably have classes you attend."

As I walked away, I couldn't help to compare that little exchange to one I would have had a baptist pot luck or something - they don't have summer socials at baptist churches. It is the devil's playground or something like that.  Anyway, instead of the casual, "You don't want to know from me; this ain't even my neighborhood," reply from a visiting priest, I would have gotten the preacher and two deacons giving me the Bible quick draw while a couple of their wives gather around to hum, "Just as I am."  I would have been baptized before being even able to taste a tenderloin sandwich. It wasn't as though I was dead serious about converting, but I kind of was interested in hearing the spiel.  Besides, who knows?

At that point, I was ready to journey home.  But first, I had some business to attend to - so I thought.  I sauntered over to the booth where they sold those tasty-looking tenderloin sandwiches.  "Do you have a way I can get it to go?  I have a little ways to go and I walked."

"Thanks anyway," I replied trying to hide my disappointment.  Realizing that I am trying to eat healthy as well as get my exercise, I knew that I had no business eating that fine looking sandwich anyway . . . that sandwich that looked and smelled so delicious . . . yeah, that one.  I started walking home thinking that God was helping me look after my health - and I didn't even have to convert to Catholicism to get it
.

Welcome back to blogging. I enjoyed that. Brought back a lot of memories! Church bazaars were a big thing in Africa. I've been to them all. In South Africa, the Lutherans get my vote - German beer on tap, loads of bbq, hand crafted goods, baking and music. :D

They have some pretty big ones here, too. It ranges from a full on carnival with big rides to merely a home cooked dinner with a quilt raffle.