Do You Mind if I Smoke? 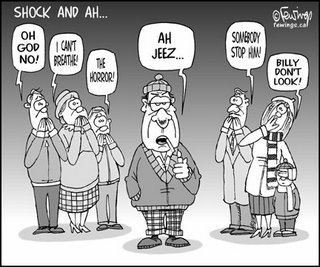 The city of Henderson, KY is in the process of passing and ordinance that bans smoking. It seems that there is a wave this thing going on - at least in this area. Henderson follows Owensboro, Lexington, and Frankfort of cities in Kentucky that are moving in this area. Henderson, however, may have the strictest legislation of them all because in its present form, the legislation would ban all smoking in public - even in bars.

Henderson is a city that can't stay away from controversy. It seems that every year there is SOMETHING that gets the citizens' bowels in an uproar. Last year, the issue was a payroll tax. Previously, there was a gay rights ordinance (that was quickly overturned the following year when the citizenry ousted the representatives that voted for it). This year's controversy is the smoking ban.

The basic dilemma is does the desire to protect the public from the nuisance and danger of second-hand smoke outweigh the freedom of business owners to decide their own policies regarding smoking. There are key points on both sides.

Government regulates all the time regarding public safety and nuisances. There are laws forcing drivers to wear seatbelts and motorcycle riders to wear helmets. Property owners must keep their lawns cut at a reasonable height, and one cannot have cars old cars parked in their yards. Protecting the health of non-smokers - especially children and employees (who are both compelled by their position to be present) is not out of line. It is the responsible thing for government to do to protect the citizenry.

On the anti-ban side:

Business owners in a free country have the right to decide the policies that occur in their businesses. Many people come to these establishments to relax, smoke and drink. Smoking is a basic element of this lifestyle and customers will go elsewhere if they aren't allowed to smoke. This will drive businesses to close (one in Henderson has already put his club up for sale). Nonsmokers know what to expect when going to these type of establishments. They can choose to go elsewhere if they do not want to be in that atmosphere. In a free, capitalistic society, we should let the market decide.

Those are the basic arguments. If anyone has an opinion on this, I would like to hear it. Just like in the "Little League Ethics" post, I will give my opinion next time.