Thursday Thirteen #6 - States I have been in. 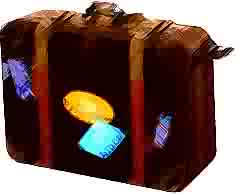 Last week I wrote a book on Thursday Thirteen. This week I will give you a break. These are the thirteen states* that during my life up to now, I have lived in or visited. In no particular order:
1. Indiana - born and reared (sometimes raised).
2. Kentucky - work there now. I remember as a kid coming across the bridge at the Ohio to go swimming in the lake at John James Audubon State Park. Of course, swimming in lakes now seem to be passe'.
3. Tennessee - I have been there a number of times. The first time was when I was 13 when my mother took us to the Elvis Presley museum among other sites.
4. Florida - When I was in grad school, a friend of mine took me to Orlando and Cocoa Beach for a long weekend. She had just broken up with her boyfriend and wanted me to accompany her since the trip was already planned and most importantly, paid for. It was a totally platonic trip, but she wanted to rebound. This was the first time I flew anywhere.
5. Illinois - Been there quite a bit. The first trip to Chicago was on a field trip in high school. If you ever go, stop by Geno's East for pizza!
6. Missouri - My first memory of St. Louis was my mother taking me there for a baseball game. Mom was great!
7. Nevada - When I got my present job, I cancelled a trip to Detroit for a conference and opted for a different conference in Las Vegas. It was one of my better decisions. I went back to that conference a couple of years later. They no longer have it now and I have neon withdrawl.
8. Arizona - During one of my trips to Las Vegas, I saw the Hoover Dam. Close to it was the state line of Arizona and they make a big deal about the time zone change. I walked into Arizona and back.
9. Ohio - First memory was my mother taking me to a baseball game - good ol' mom. Since then, I have been there a ton. I went every weekend there for six months when my mother had her 34 hours of brain surgery there. It is a four hour drive!
10. West Virgina - Went there for my college fraternity's national convention. Wheeling is a neat town.
11. Pennsylvania - I went to the outskirts of Washington, PA when I went to Wheeling - just to say I have been in Pennsylvania. Since then, I have flown into Pittsburgh.
12. Virgina - I visited Arlington National Cemetary when I went to DC for a conference. It was very sombering.
13. Washington D.C. - Yeah, I know it isn't a state, but it kind of acts like one. It is a city in the US that isn't in a state. If you think about it, it is very strange. What is a "district" anyway and why don't we have more than one?

I've never really cared for anyone else's TT's, but I really like yours.

I'd never heard of 13 Thursday before.
Half naked Thursday and Freaky Friday, but never that.
Might have to run off with that at some point!

I'm guessing it's the same sort of story as Australia - the capital was established after the other states and they had to make it its own "district" so the states didn't get jealous. That could be completely wrong for D.C. but it's what happened here. The couldn't decide whether to make Sydney or Melbourne the capital so they made a different one in between and gave it it's own territory.

Nikki: That's really nice. Now I have pressure to perform, though. lol

Tai: Yeah, I read others for a while when I decided to jump in (only half-way because the others have the obligatory "join us" spiel.

kristarella: I bet you're right. I also think it has something to do with the national capital not be subjugated to the rules of a state.

Skittles: So you couldn't before? I just thought I bored you. ;)