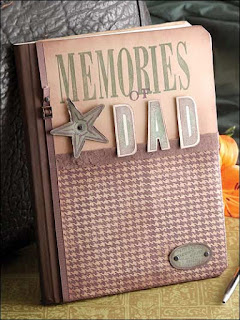 Today, of course, I am thinking of my father.  He passed away when I was 18 - just six minutes after my birthday expired. Life was crazy then and the whole thing was surreal.  I watched him waste away from cancer the preceding months.  Everyone told me that he waited to pass so he wouldn't foul up my birthday.  I like to think that is true, but who knows?  If so, it was a nice present.

I didn't have the same experience with my dad as my siblings.  They knew a man that was gone a lot. They remember a father who probably drank too much and was prone to be a little scary as a result.  I am glad that isn't my memory.  In my years with dad, he was a nondrinker who made my dinner every night because my mom worked.  He was the guy that took me to every little league game and even coached a little for my team.

Dad was responsible for giving me my first friend of another race.  He helped a black man that he worked with get his son into the little league I was in.  A few times he and I, his friend and son went together to the games and got a bite afterwards.  I thank him for showing me how normal life should be.

My father had a keen since of humor which involved his own vocabulary.  He had names for everything.  He called orange juice, "Simpson," water was sky juice, and because we always tended to leave the vacuum cleaner (the tank kind with the hose), in the hallway as a hazard, Dad called it an automatic tripper.  There were MANY more names he had for stuff, I wish I could remember them all.

Dad loved corn bread and made it practically every day.  I never cared for corn bread as a child, but dad was determined to change that.  He would change up the recipes and add stuff to it just to try to win me over.  I remember one day he took some out of the oven and there were pools of butter on the surface.  He said, "Jeff, take you a bite of this.  I know you'll like it."   I responded, "Dad, you know I don't like corn bread, why do you keep offering it to me?"  His response was, "That's not corn bread; it is buttered corn cake!"

When I was 16, I got into a car accident.  It wasn't my fault - REALLY!  Some guy backed out of a Pizza Hut across three lanes of traffic and hit me.  I was really scared to call my dad.  I don't know why; me being 16, I just thought somehow everyone would figure it was my fault.  My dad showed up and made me believe right away that it was no big deal and it wasn't my fault.  He even fixed the fender in our driveway with his auto body expertise.

Anyway, that is the father I remember.  I am blessed with those memories.  I do miss him more than most people realize.  I miss you, Dad. And dad, I like buttered corn cake now.

Email ThisBlogThis!Share to TwitterShare to FacebookShare to Pinterest
Labels: *, About Me, family, Father's Day, humor, memories

(((HUGS))) Jeff, I'm glad you have lovely memories with him. So sorry that you had to lose him that young.

Thanks, Amel. Memories are one of the most important things we have. I think that is one reason I write.

This was a wonderful tribute to your dad!