The Politics of Astronomy 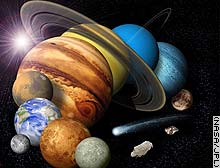 This may be a little late and others have talked about it, but why is it that Pluto was demoted? Oh, I know the company line. It is different than the (other) eight planets so the International Astronomical Union wanted to call it something different. I still do not see the point.
The astronomers redefined the definitionn of planet. Because Pluto's orbit takes it through part of an asteroid belt, it can't be a planet. Now a planet's orbit must be clear from all other things. Why that is important in calling something a planet, I don't know.
Pluto is now a dwarf planet. Is a dwarf planet not a planet? I still don't get it. The Toyota Prius is a hybrid car but it is still, indeed, a car is it not?
I would have loved to hear the debate on this topic at the meeting. On one hand you have the conservative planet snobs who want the "planet club" to be as exclusive as possible. I mean, c'mon, we can't let just any space rock in. The whole idea of status is making sure we are better than someone else. If we let Pluto in, then it will drag down the whole neighborhood, right?
On the other side, there are the liberal, free-love group who doesn't want any heavenly body excluded. To this bunch, the moon should be a planet and even the fringe is lobbying to let Australia have planetary status. This stuff is pure lunacy (pun intended).
Pluto is a dwarf planet because all that is necessary to be a dwarf planet, according to the group, is that the space body must be round. According to the New York Times, Pluto joins Ceres and Xena as the system's dwarf planets. But wait, if all it has to be is round to be considered a dwarf planet, wouldn't that include all the moons? They are round, aren't they? That means our moon should be considered a dwarf planet. Is that a step up? Is it a revolution of sorts because the Moon doesn't have to be Earth's moon, it can now consider itself the dwarf planet Luna?

I guess one rock's loss is another one's gain.

Xena's a dwarf planet?!
Sheesh! I thought she was a warrior princess......

I guess it never occurred to them that Pluto goes through an asteroid belt. Thats probably why it isn't round anymore.

Then there is the fact that it has had planetary status for YEARS. They should just have left it the way it was. Far as I am concerned, Pluto is a Planet. My opinion won't change because someone deems otherwise.