From time to time, I will give my opinion about a television show that is courting the couch potatoes for its survival. Since the fall television schedule is kicking off, there may be more of this in the coming days. I like TV when it is good and detest it when it is bad. What conclusion will you draw when I tell you that I don't watch as much as I used to?

The first program I will mention this year is called Justice. It is on Fox Wednesday nights. The premier was this week and I wasn't sure I was going to like it, but I was hopeful. I like legal shows (The now defunct the Practice, and Boston Legal, which it morphed into are two programs that I don't/didn't like to miss). 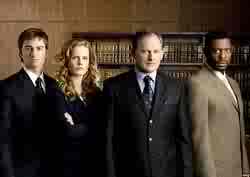 If The Practice and CSI had an offspring, Justice would be the result. It is fast-paced and unpersonable like CSI, but it does have the show's science and polish. It also contains The Practice's legal smarts.
Hopefully, there will be more character development in the future. We really do not know too much about the characters after one program. The show just didn't have enough time for that. It was almost like the original plan was to have a two-hour premier, but at the last minute the network didn't want to allow two-thirds of its prime time programming to an unknown, so it was edited down to the bear-bones case. We know the character's personalities, but not anything about them. In that way, it reminds me of CSI.
The most interesting element of the show is it reveals the tricks and tactics of superstar attorneys in big cases. It kind of gave me an uneasiness about our legal system. It reconfirmed the popular belief that money can trump truth - although it worked out in the pilot.
One unique part of the show comes about at the end of the hour. After the case is decided, the audience is privy to what really happened. That way we can compare courtroom "truth" to truth itself.
It is too soon for me to give my endorsement of this program, but I will say it kept me interested. I will be tuning in again if that tells you anything.

Jeff, I don't have your email. Mines is cinisoul@aol.com.

I never was really into law or political shows. There would have to be something done to WOW me over. Now that I think about it, I haven't watched much T.V. Medical Mysteries caught my attention, and I can't wait for the third season of lost to begin.

I'm looking forward to Lost and Gray's Anatomy to return.. with the exception that they put Gray's Anatomy against CSI!!.. that ticked me off no end! I don't have Tivo or whatever it's called so I'm guessing CSI will wait until reruns! Hard choice there though.

thanks for coming by my journal..
Oh we'll go back to the moon... but probably not in my lifetime, since I don't have a whole hellava lot left! dang it!

I got sucked into "Prison Break" last year. Add to that "24," "House," and "Desperate Housewives" and I am an accomplished couch potato.

No reality TV for me though.

(BTW, the word verification below rivals an optometrist's test. I think I am getting old ;)