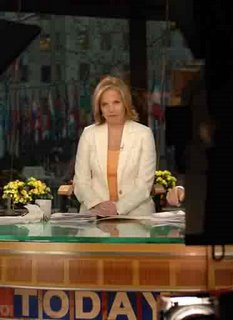 I took the time to check out Katie Couric in her debut on the CBS Evening News. I don't think she did a bad job, but it just didn't feel right to me.

Maybe I don't know what CBS's is going for, but it didn't seem like the evening network news. It had more of a Today Show feel to it. I know, some folks may be thinking, "Hey, she was on the Today Show so it is just your mind making you think that." I can't argue against that. I think there is more to it than that, but it is a good argument.

Couric seemed to be a lightweight. On the Today Show she wasn't so much. I think she came off the same "weight", but a network anchor demands more authority than a morning news show host. She seemed to have the same amount (enough for the morning show, lacking for the evening news).

I guess it is tough to be a pioneering, female, network news anchor. Competing with the ghosts of Cronkite, Rather, Brokaw, and Jennings is no easy task. Ask Brian Williams on NBC how tough the anchor's job is. He is slow in getting respect following Tom Brokaw. Being female is just that much harder. For right or wrong, people (even women) do not see the authority from females as easily as they see it from men - all things being equal. 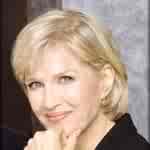 Some women can pull it off. I think NBC's Andrea Mitchell and Norah O'Donnell have it. My first choice would probably be ABC's Diane Sawyer. Maybe Katie Couric will have "it", too. I don't know yet.

The first show is always a tough test. Things may get more comfortable for her and the audience. However, people need a reason to stay after their curiosity pushed them to turn over to CBS for Couric's premiere. My guess is that folks will drift back over to Charles Gibson on ABC again today. As for me, it is back to Seinfeld reruns on TBS.

I do like Couric, but I think CBS has their own agenda, which has less to do with hard news and more to do with pop-ratings. We'll see. I miss the news anchors who told it like it was ...

Will Katie pull CBS out of the ratings basement? We don't know, we get most of our news content from the Web these days, and our entertainment from the cable news channels. In the long run, the Web will carry the day, and the networks will have to adapt. This, at least, is our fearless prediction.
Bonnie and Walt