A Different Kind of Addiction 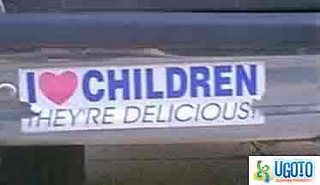 I know there is differing opinions about these type of things, That suits me. Actually, I am hoping that someone reading this WILL disagree with me and comment so I can begin to understand the behavior in question.

We recently sent out our invitations to our wedding reception-type event. It is an evening affair in November. It is going to be in a relatively small venue (100 or so capacity). Do you see where this is going?

There were a few responses with the RSVP cards that apply here, but this one was the worst (so far). One card was marked, "accept - 5"!! WTH? Here is the thing. This couple has three kids - all under 11-years-old. Keep in mind, the invitation is addressed to "Mr. and Mrs So-and-So". It didn't say "and family" or anything like that.
Why would anyone assume that it is okay to bring their small children to an adult, evening function? Why would anyone WANT to?
I understand that childcare is sometimes a problem. However, this couple has been out without their kids on a number of occasions - usually involving businesses that insist on a 21 and over clientele. They also have a built-in babysitter with grandma living right there with them. Even if they didn't, for this topic is bigger than this one instance, they have nearly TWO MONTHS to work out a sitter for a couple of hours this particular evening.
As far as I can tell, this couple and many others (probably some reading this) have an offspring addiction. That's right; they are addicted to their children. Addicted so much, they are, that it totally clouds their judgment regarding their kids. I have seen this before with this particular couple. They bring their kids nearly everywhere and allow them to stay up all hours of the night even when they are having adult company. So disoriented from reality are they that they believe other people are as enchanted by their young ones as they are. They must think, "Oh everyone will want to see our kids without question. Jeff will be thrilled that we decided to bring them." Well, Jeff's not thrilled.
To put this in perspective, I knew when I sent the invitation that they would do this. I still elected to send it, so I knew what I was getting. I just thought MAYBE, just maybe they would have a clue. But no, because see, it is a sickness. Just as one may steal from a loved one to feed a cocaine addiction, offspring addicts will punish those around with them with the presence of their children in inappropriate or undomfortable situations.
Let me contrast this example with another invitee that is bringing her child. One of my fiancee's co-workers received the invitation and asked, "Are you allowing children? I mean, I can try to find a sitter, but it is hard sometimes. I can try, though." My fiancee, knowing that there was surely going to be other child crashers attending graciously told her co-worker that it would be fine. See the difference?
My fiancee and I had decided long ago that when we have children (and we do want them - I really love kids, seriously), we are going to make every effort not to include them on many outings until they prove their merit. We certainly are not going to bring them to adult functions or other events where children are not CLEARLY welcomed. We decided this policy long before we were even officially engaged.
Okay mothers and others with insight, let me hear it. Where is my thinking faulty? What is it that I don't understand that makes this seemingly irrational, and discourteous behavior appropriate? While you are thinking about it, I am going to see if I can change my reception location to Chucky Cheese.

I laughed when I read this. I hate to tell you this but you are RIGHT. I didn't do that with my kids and I have 2. Yeah it is hard to find a sitter however they had plenty of time in which to do so. I have no idea what to tell you except that maybe you should have said NO KIDS. But I understand that some people honestly can't find a sitter, so here is an idea for you. Hire a highschhol kid to babysit, kind of like a day care. Put the kids somewhere out of the way..... Tawnya

Sigh
Well I guess this will be considered a disagreement, in a weird kinda Jodi way.
We just went to a wedding. ANd ALL four kids came to the wedding and yes, sigh, the evening reception.
Once difference they were invited.
As they are close with the bride(their cousin).
As for any other wedding? No. We get sitters, or we dont go.
I would never assume that it is okay for kids to go...and really? I'd take advantage of an evening out with my other half, for they are few and far between!

Unfortunately, because you and your fiancee are making a "family", most people in attendance think you want to include theirs. On invitations, you have to be EXPLICIT and say "No Children Please". Since the invitations have already gone out, Tawnya has an excellent suggestion in providing kiddie entertainment - removed from the adult gathering (another room?).

For the record, if I can leave my son behind, I will! I need some time alone or alone with my husband on occasion and the "no kids please" get-togethers are the perfect opportunity.

Tawnya: You have a good suggestion. However, as I stated, the place is kind of small so there is no place to put them. On top of that, the parents wouldn't bare to be without them for any length of time . ;)

Jodi: Yep there is a difference - the invitation and closeness of the children to the bride. That is all cool. The only closeness I have with the kids coming to mine is that I end up buying girl scout cookies and candybars from them on a number of occasions. lol

Sayre: Actually, we are making a married couple - baby showers come later. ;) It is funny that we have to be so specific. If we really HATED the idea of the kids coming, we would have said "no children" and ultimately offended a lot of addicts. LOL

we have been to a few weddings. some we have brought the children (only one with all five) and we have attended some without them. it all depended on how intimately we knew the bride or groom, the venue, the time and how well the happy couple knew our children.
we caused quite a stir with a family member's wedding where the invitation did express no children. Bill went and I stayed home with the circus. Turns out quite a few of the inlaws were royally pissed with me and it still gets brought up from time to time ten years later. I still stand behind my decision. Our daughter Jodie was only 2 weeks old at the time. And the cousin's marriage? It lasted all of three months.
Honestly it seems that this is one of those courtesies that has fallen by the wayside as we have evolved into a very rude generation.

Laura: I think you have made the right decisions with yours. If one parent elected to stay home with the kids, I would totally respect that and send a piece of cake home with the spouse.

Emily Post and I were brought up to understand that only people whose names are on the invitation are invited. If the invite read "Mr and Mrs Rude Dude" and not "Mr and Mrs Rude Dude and Obnoxious Offspring," then ANYONE with a modicum of social graces would KNOW that their brats are not on the short list.

Hope their wedding gift makes up for the irritation...

One of the ladies at my church has a halloween party each year. Her invitations say "No children." (You can imagine how hard this is with a mormon church, what with all those huge families that have more than four kids.) But each invitee has been really good about it. They just simply find a caretaker and enjoy an evening out. There doesn't have to be any hurt feelings involved. I think that since this is YOUR event, you should let the guests know what YOU want. They just may not have realized it was an adult affair.

I hope your wedding goes off without a hitch. Although, be forewarned, there is ALWAYS something that goes awry. Happens at every wedding I've been to, even my own. ;)

Gail: Thanks for your support. Wow. Now any parents that read this who would hate me may hate you more. lol I am sure the evening will be fine - kids and all. Seriously, though, I am surprised no one has taken me to task yet.

Ari: I think the people at your church are more understanding than my lame friends. LOL Maybe I should have invited you guys instead. ;)