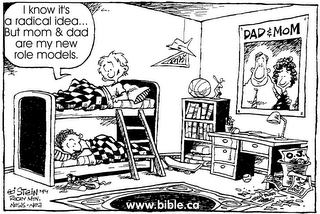 This is post is probably not going to set right with a lot of people. However, I think we can all disagree and still get along. Have you thought about what kind of people our kids are supposed to look up to?

When thinking about role models for today’s youth, it is mostly athletes and musicians for boys, and musicians and actresses for women. In a poll I saw (2004), Britney Spears and Jessica Simpson were at the top of what teenage girls consider their role models. I didn’t see one for boys, but listening to them talk and dress; it is pretty much the same thing (entertainers, not Spears).

Years ago, kids looked to police officers, fire fighters, teachers and even the president as role models – with other politicians such as congressmen and mayors. Police officers have been tainted with such public displays like the Rodney King arrest and similar items, that kids do not respect them – especially given that they tend to appear as the anti-rapper in society. Firefighters got a lift from the 9/11 disaster, no doubt, but those sentiments have settled now. Politicians since Richard Nixon are under extreme scrutiny. Every tainted deed is broadcast from the highest mountaintop. Who could look up to Clinton or GW Bush now? Don’t get me wrong, some people shouldn’t be role models despite their position, but we are our own enemies sometimes.

A lot of kids these days say they just look to their parents or family members as role models. That makes sense and I hope it is true. It seems to me that it is probably reported by kids who want to say the right thing. Regardless, we should take it seriously.

Are you doing anything that you wouldn’t want the kids in your family to do?

Here is the controversial part. If I were king, I would raise the pay of teachers, police officers, and firefighters three fold. However, here is the catch. Being a role model would be part of the job description. That means that none of these occupations allow for anything that we tell kids that are wrong or that they should stay away from. These people would not be hired or retained if they drink, smoke, curse, sleep around, cheated on their wife/husband, etc.

Does that mean we tell our kids that people who smoke, drink or swear are bad people? No. We just tell them that it isn’t the right thing for them to do. Hopefully, through ourselves and other good role models and instruction, the rest would take care of itself.

Yes, if I were king, things would be different. However, I would probably struggle as a good role model. At times, we all do.

I don't know about firing someone for something they did wrong the first time, but if they repeatedly did this, then I would do something about it. Where all human, we all make mistakes. Parents should be the roll models, and not celebrities. When I was a kid, I didn't look up to anyone, because I didn't even know what a roll model was. I didn't have my father in my life for the most part, and the one man that was the closest thing to a father, wasn't!

I guess now that I think about it my roll model is my mom. She wasn't perfect, but she was there for me when I needed her.

We must agree that celebs and sports "stars" make poor role models, and as we progress through life, we do discover that people often fall off the pedestals that, for one reason or another, they have been placed upon. The lesson, as Charles says, is that we are all human and make mistakes, but the real (and ideal)models are those who make it a point to help others, even if they do have flaws. Hell, if we were meant to be perfect, we would have been created in that fashion.

In an ideal world, parents would be the role models for their children... but not all parents are cut out for that. The good ones try, but as my son can attest, sometimes my tongue runs away with me and I say some pretty blue words around him. He always looks at me and says, "Mom! That wasn't very polite!" And I appologize and tell him that I would try harder to not do that. And actually, for the most part, my language has cleaned up considerably. He knows now that those words are used only under extreme stress. So I suppose I am a role model in a way - I am working to correct a flaw and he sees me doing that.

Charles, Bonnie and Walt: I agree, I wouldn't fire people for first offenses (perhaps not even second). I think humility is a good attribute to model for kids, too. If a role model, parent, teacher, whatever falls, they need to acknowledge the wrong and show contrition. That is why celebrities are generally bad role models. They glorify their lifestyles too much.

Sayre: I am glad that you try to correct and acknowledge your faults to your son. So many people are too proud to acknowledge their flaws. The little eyes that watch learn that, too.

Thanks for the vote, but I think the crown is too big for my head. ;)

Well if this didnt settle well, thats a problem. You hit so many great points. On my drive in to work, I was deep in thought about kids and parenting...

I do have to say that our oldest, on his own cyberworld space out there...did a meme and when asked who is heros were...He listed his Dad and grandfather...
Made us happy...estatically happy...