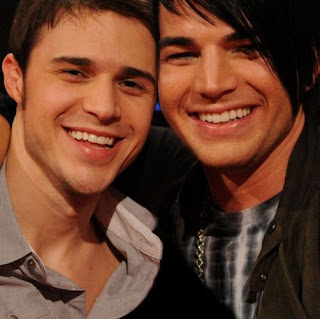 In an upset of sorts, Kris Allen edges out Adam Lambert.  Some people wonder how this happened.  For many, it was obvious that Adam was the more talented vocalist and was much more polished a performer.  Here is my take:

1. The judges all but handed him the title before.  Fans do not like to be dictated to as far as voting.  So, there was some spite votes.

2. Kris got the "cute" vote.  All the 13 year-old girls voted for Kris a thousand times each.  The only ones that voted for Adam probably fall in the gay/bi/curious category.

3. In the real vs fake contest, Kris won that contest.  Call me skeptical, but I doubt a lot of people who like "the genuine deal" would vote for plastic-looking, eye-lined, polished Adam. That doesn't mean he didn't deserve the votes, just that he didn't get them from that group.

4. It recently came out (in the proper circles), that Kris is a Christian and was somewhat active in his church's ministry.  Christians just LOVE to vote for their own kind.  The fact that this wasn't universally known eliminated the counter-Christian vote which is more visible, if not in high number.

Everything in life seems to be about things other than what they are supposed to be on face value.  The fact is that Adam should have won it if it was purely a singing contest.  I don't know if I should be ashamed or not, but I was content with the outcome.

I haven't watched Idol since the year of Taylor Hicks. But you can't escape it even if you don't watch. I was driving to work the morning after and there was a story about it on NPR! NPR!

Which just goes to show you just how much a part of American Life this program has become.

LOL, I love how you totally flashed past the fact that you haven't posted in ages.

I'm not a big IDOL watcher, but I do like many of the artists that have made it from the show (Chris Daughtry, Carrie Underwood.) I hope adam will be one too...

Hey guys. I just now saw that you posted. Here is this post that you thought you would see, Brian!

Hi Jeff, welcome back. This is actually the first year that I watched American Idol. I agree that the judges made it sound like Adam had it in the bag, but I don't think it was spite votes so much as people not voting because they assumed he was safe.

I'm not sure if I agree on the cute factor. Adam's look is very in right now, but maybe I'm thinking more of Australian teens than US ones. One thing I will give Kris is that he really stepped it up the last few shows. Where he blended into the crowd for me previously, those last few performances I really saw his potential to be a recording artist.

Nevertheless, I'm definitely an Adam fan and quite keen to watch his next move. I loved his performance with KISS! (Their's was the first concert I ever went to without my parents.)