Atheism and God: The Ostrich Paradigm 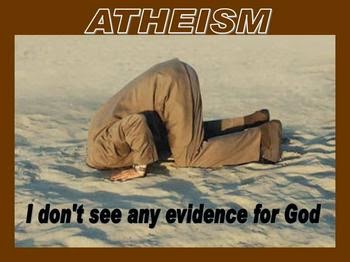 Part II in the Series of the Process of Prayer

I stated in my first post, "God will answer your prayer if it is the best thing for His purposes, or He won't if it isn't.  In that case, it stands to reason that if you don't pray, God will just do what is best for His purposes - just without your input.  This begs the question:  Why pray?"  If you didn't catch that post you should. You can read it here.  The atheists of the world may look at that, smile, and then say, "So if that is the case then you don't even NEED a god in that scenario.  I mean, que sera, sera, right?"  It's like our relationship with Santa Claus.  Well, I want this widget for Christmas.  If I ask Santa, I might get it... but I might not.  Perhaps there is no real Santa.

Atheists say they want proof of everything to believe it - which isn't true.  They are perfectly happy with believing in the best guesses of those they respect. Many like to think that science has all the answers to the questions that believers assign to God. There is power in evidence, proof and the cherished peer review. However, if they were intellectually honest, they would be agnostics rather than atheistic.  The agnostic states that he finds no evidence that a god exists so he leans towards not believing in a deity.  However, he concedes that there is no test that can prove without any doubt that a deity or deities do not exist.


So what would cause an intellectual who admires the vastness of science and the cosmos to make such a definite conclusion about something that doesn't really have a conclusion at the physical level? What, indeed.

You show me an atheist that wasn't indoctrinated by a family, culture, or subculture and I will show you a former believer that got burned (in his estimation) by God, or those that claim to be representing Him. It is difficult for people to believe in a god that operates in a manner that offends them. So they vanquish God in their minds and place their faith in science or some philosophy. This, I call "The Ostrich Paradigm."  Everyone has heard the myth that if an ostrich is confronted with something that it doesn't want to face, it will hide it's head in the sand with the thought that since it no longer sees the threat, it isn't there to fear. This is the same principle. How many times have you heard someone say, "I just can't believe in a god that would allow . . . [insert some random tragedy here]"?  They don't believe in that offensive god, so that god is no longer there.

I understand that, so it doesn't offend me. Everyone has a path that they must follow. I understand the hurt. I never try to convince someone to think like me.  I only explain why I believe as I do.

You may be thinking, okay maybe I can buy your theory about atheism, but what about prayer?  Despite their irrational concrete conclusions, why are atheists wrong about prayer?  If God does exists, how does this seemingly cavalier attitude that He has about prayer aid Him in His purpose?  I think there are answers to these questions but I think they are difficult to understand at the human level.  But, I will continue to try.

My next post will talk about that effort in the light of my own version of divine betrayal.  You can find it here.

Related post in my archives: Atheist vs Believers: The Giving Wars

Very well written post. And thought provoking. I have met some atheists as you describe. Interesting side note 8 out of the 12 serious Pagans I know are ex Catholics who were badly hurt/harmed by their upbringing.

I do know some very nice sane logical atheists who are not ferociously anti-religion. I also know a few atheists who do not believe in God because they are so egotistical they ARE God.

Most fit that model, I think. The ones that you mention that believe they ARE God or those that are offended that a God could dictate what is acceptable or not an individual's life. Being offended that way makes them decide that they will remove that concept from their lives. They could probably go along with some kind of subservient angelic being if they could eliminate something of a higher order to deal with. I am having a conversation with a person on Facebook right now that fits into that category.

Agnosticism and atheism are not mutually exclusive.

Thanks for stopping by.

I understand what you are saying and that graphic backs it up. However, in explaining the concept of this, I try to make it as less complex as possible. People use the terms "atheists" and "agnostics". I have never heard anyone get more descriptive than that. So introducing agnostic as an adjective could really get distracting.

I could have substituted the terms gnostic atheist and agnostic atheist into my post, but it really wouldn't change the concept and that was the important thing to me.

It is funny, when I presented this post on Facebook, the chief argument against it was, again, an argument of semantics which I think misses the point. I mean, we can substitute the term "atheists" with "orchids" and "agnostics" with "pumpkins" and the concept doesn't change. It is all just language - kind of like what Windows does for PC's. It just helps us manipulate computer code where we can understand what were doing at the keyboard.

Thanks again for participating. I love that avatar, by the way. I have a dog that actually makes that sound that Sutherland is making there in "Invasion of the Body Snatchers!"

Mark. Every time I see that face I chuckle.

Jeff
My one school friend and I (saw that movie with her) went around making those noises for ages afterwards. We were 15 or 16 and it seemed incredibly funny to point at people at random and go... um...

well, how do you describe that sound? LOL

Gnosticism & Theism have specific meanings so I wouldn't substitute for any other Plantae as in your example :)

Just to be clear:
Gnosticism:- From Greek "Gnosis" - Knowledge of God(s)

People shouldn't even need to identify as agnostic or atheist since those are the default positions ;)
Gods keep getting invented so, what can you do? [shrugs]

Technically, you are correct; I was just going for colloquial terminology. But if it helps you and I feel particularly energetic, the next time I refer to these terms I will put a footnote at the bottom of the post for clarification. ;)

About self identification - it is of no consequence. People self identify incorrectly all too often anyway. I, myself, even identified myself at one time as an expert in Christianity. I got that wrong!

Really thought-provoking. When I read the Ostrich Paradigm, what I head in my mind was exactly what you were describing: an image of the ostrich burying its head in the sand he he...OK, let me continue reading the next part.

Jeff...(((HUGS))) Just read the third part. Reminded me of my uni friend's brother who died of bone cancer. It all happened so quickly. He was around 14 or 15 years old. They were fasting and praying for him to heal...for a miracle...but he was gone so fast. When they found out he had bone cancer, it had already spread to other parts of the body. Nobody could have predicted such a healthy-looking young teenager could have been taken so fast.

Another uni friend's sister lost a son (motorbike accident) and then a daughter (cancer) so now they don't have children anymore. I often wonder how the parents could still hold on to God after all that...life is so unpredictable...

I'm looking forward to reading the next part.