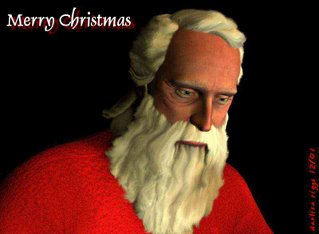 The coffee shop was mainly empty when the stranger entered. Most patrons had gone home to be with their families now that the holiday was winding down. As the new visitor looked around, he recognized Tom Trindle paying his check. Harry Lemke was talking on his mobile phone at the counter as Mr. Trindle walked passed by and out the door without even a glance the stranger’s way. The new arrival made his way to a booth in the back. There he sat across the table from a man still in a Santa suit sipping hot chocolate and eating a blueberry muffin.

Harry, still on the phone was oblivious to the two characters seated at the back corner booth, but Stella the waitress was not. She had already waited on Santa and found him friendly enough to earn the bells on his hat. She didn’t know what to make of the strange man now seated with him dressed in a robe and sandals – odd enough in principle but particularly so this time of year. She took him a glass of water. The stranger smiled at her and offered his thanks as he called her by name. Stella slightly taken back by the fact that this visitor knew her name inquired, “Who are you supposed to be, Jesus?”

The stranger replied, “I am.”

Stella mustered an uncomfortable smile as she made her way back to the counter for she knew that the stranger required nothing more than the water and didn’t look like he could pay for more than the price of "free" anyway.

“I always wanted to meet you,” Santa said. “You are the reason I’m here.”

Santa spoke up, “I assure you sir, I have only the most honorable of intentions. I make all the boys and girls know that the night before Christmas is the most special time of the year. I picked your day to show generosity and love to all people.”

“Do you not think that you have replaced me in many the lives of the children and their parents?” asked the bearded man.

“I cannot control the minds of the people. I can only be what it is that I am.”

Jesus smiled, “You are my seed that is planted in the children’s hearts. The crops that grow from you will only be realized when the children are older – if they are watered and nurtured.”

Santa exhaled in great relief. “I am glad that you see me that way. I do not want any glory for myself. I only want to devote my being to loving and giving. We are a lot alike in that way, do you not think, Teacher?”

Jesus replied, “As there are attributes we have in common, there is one major difference between us that can never be bridged no matter how much faith the people have.”

Santa smiled sweetly, “I know, Master. You do not need to say any more.”

At that instant, Stella looked up to see an empty booth. She rushed over to see if on this Christmas evening, she would actually get stiffed for the $2.25 owed to her. She discovered on the table a five-dollar bill and a profound sense of peace.

I have always seen Jesus and Santa as two sides of one idea. Give and forgive.

I wanted to pop in and wish you a Happy New year!
May your year that comes, be filled with with wonder and brightened by awe...May you find a ground that engulfs you with peace...And may your dreams be filled with color!