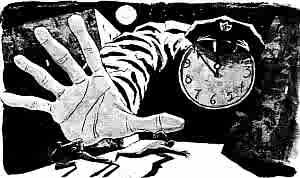 Good news! I have another tiff to report in newlywed land. Again, the
marriage isn't in trouble blah blah blah, I just know that some of
you guys like to read the gossipy side of this psycho's life.
Uh . . . I mean some of you like to see these conflicts from a male
point of view.

Friday night, my wife and I were watching a movie. She wasn't feeling
well so she decided to go to bed at about 9:30 pm. Did I mention it
was Friday night?

I told her to get some rest because I knew how it was to not feel
well. Sometimes, one just has to go to bed - even on a Friday night.
Seriously, I had no problem with her going to bed. I have gone to bed
early before like that so it was fine with me.

After she was in bed for about a half an hour when I decided that I
would go to check on my mother like I do EVERY SINGLE NIGHT. I take
off leaving a light and the TV on because I didn't think I would be
gone long and I thought the TV coming on when I get back would be
more disruptive of my wife's sleep than just leaving it on with the
volume down very low (so low that she couldn't hear it). This is not
a Jeff only practice, by the way, the wife has been known to leave
things this way when running a quick errand.

I get over to Mom's and she is in the bathroom. Mom takes a long
while in the bathroom before bedtime because she is disabled and it
just takes her a while. So, since I have an office at my mother's
house, I decide to get online and check my email, some blogs, etc. I
ended up on Ebay and I lost track of time.

I ended up coming home at about ten till one to find all the lights
out and the TV off. I decided to go into the bedroom and see if she
was awake. She was.

I asked her why she turned the things off and she read me the riot
act. It kind of reminded me of a kid being ripped by his mom, except my mom wasn't ever THAT strict. I didn't receive it too well - me being an adult and all.

She said, "I didn't know where you were! I called your cell and
it just rang because you left it here," (next to my wallet, by the way).
She continued, "Then I called your mom's house and it was busy so I
guess you were online."

I responded, "Yeah! Where else would I be without my wallet and cell
phone." I went on to explain about mom and ebay and such.

"I just didn't know where you were!" she snapped again.

"I think you did; you just admitted it."

"I didn't know WHAT you were doing online!" she retorted.

"I am on the Internet a lot and you never have been concerned up till
now. I don't know what YOU do online either, but it has never been an
issue."

"Well," she decided to go in a new direction, "I can't afford for you
to leave the light and TV on like that." I felt like a kept man except for the simple fact that I make more than she does.

After that comment, I knew that there was not going to be a meeting
of the minds. I just said okay and walked out of the bedroom and let
her sleep. A movie (or at least part of a movie) later, I was asleep
on the couch.

The next morning, she acted like everything was normal. I left well
enough alone.

Well.. you did say she wasn't feeling well. People (read women)sometimes get a bit snappish when they don't feel up to snuff and of course you weren't there to "take care of her" should she have needed it.

You going to Mom's isn't normally an issue, is it?

But to a not-well mind, you were off playing and having a good time (even if it was at Mom's on the internet) while she was home in bed.

I know how you feel. It's just the flaming injustice of it all.