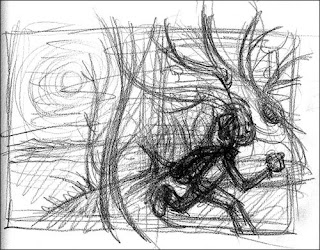 His heart was racing as he ran down the road. Isaac felt it nearly beating a hole through his chest, not only because of the stress of the exercise, but also because of the fear that welled inside him. He often looked back over his shoulder, but there was never anyone there.

He saw a small town enter his vision at the bend of the road. He knew he had to get there, somewhere where no one knew him. Somewhere he could rest – at least for a while. He slowed to a walk as the town got bigger in his view.

There were many people on foot smiling and talking to each other. Some even greeted him with a smile and a nod. He could hear music playing somewhere. It seemed like a nice enough town. Perhaps he could blend in, get something to drink, rest and figure all this out.

As he entered a small store, the middle-aged clerk behind the counter greeted him with a smile. “What can I help you with today?”

“Sure,” she responded,“ but I’m gonna have to charge you a nickel for the cup. Free refills, though,” she laughed.

As Isaac, felt for a coin in his pocket, he felt his tension easing up. The lady behind the counter had the right kind of mannerisms to give him a reprieve. He was appreciative for it, no matter how brief it might be. He plopped the nickel down on the counter, grabbed the cup and backed against the nearest wall for a little more rest.

“You sure look haggard, Darlin’,” the clerk sympathized. “Are you looking for someone? Is there something I can do to help you?”

“Well, I wish you a safe journey. If you need anything else . . .” Her sentence was interrupted by a stirring in the air.

Isaac felt a cold wind in his face. His rattled nerves reacted as he pondered how this breeze could find him again and be so cold in the summer heat -and be inside this little store. He watched the clerk’s hair blow from right to left on her head and onto her face. Then it was gone.

“What are you doing here?” The clerk's demeanor was changed. She was now shouting at Isaac with piercing, accusatory eyes.

“I . . . uh . . . ,” Isaac had nothing to say. Fear was now shooting through him again. The woman was moving trance-like towards him. He dropped his now empty cup and stormed out the door. He was met out in the street with the glares of the once friendly eyes of the townspeople. They froze and started heading toward him in the same way as the clerk did just seconds before.

He dashed between buildings and headed across the barren countryside. He saw the road winding around in front of him and headed for that rendezvous point that will guide him away from yet another village that turned on him without explanation. The answer to this real-life nightmare, he understood, was blowing in the wind.

It is an allegory and not to be confused with the big project I have been talking about.

There's a cold wind a blowing.

I can't wait to hear about the big project. :-)

Chris: Yep, pretty cold. It is quite the enigma.

Michelle: Thanks. News about the project is trickling in. :)