History, The Shack, and a Healthy, Loveless Life 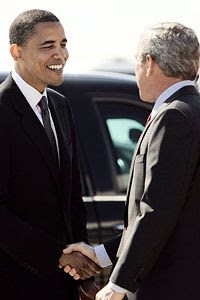 NEWS - I am thrilled at the results of this election. Even SOME people that I know that voted for McCain seem to understand the significance of this election - in a positive way. A majority of the citizens of the US put an African-American into the highest office in the country - perhaps the most powerful position on the planet. THE PEOPLE put him there! At last, there is hope that EVERYONE is invited to the table. When one sees the face of a minority on the television screen, it just may be the president of the United States, and not an example of one of the negative stereotypes that unfairly rose to the attention of the masses. That is huge. What touched me the most, is a story I heard on one of the news channels where it was heard that African-American man stated that he could finally look in his young son's eyes and proclaim, "Son, you can be ANYTHING you want to be in this country," and be able to surely mean it.

ENTERTAINMENT - I am VERY motivated now to read The Shack by William P. Young. A lot of people who have read it give it glowing reviews. However, that is not why I want to read it. It is those people who are attempting to expose it as heresy that is causing me to shell out bucks at Barnes and Nobles tomorrow and pick up the thing. Some critics give no allowances for literary license and their critiques sound very dogmatic. I am not a fan of legalistic dogma. I think people miss out too much on blessings by whining about anything that strays from a textbook approach to spirituality. It reminds me of the time when the movie, The Last Temptation of Christ came out and a high number of religious groups were up in arms over it. Most of them, by their own admission, had not even seen the movie. Of course, I had to see it. Guess what? It wasn't the most exciting movie I had ever seen. It certainly was not thoroughly consistent with the Scriptures, but it was far from heresy. It offered a literary approach to the humanity of Christ instead of the robot-like God-Jesus we were all used to seeing in previous movies. I see the criticism of The Shack perhaps being in that same light.

It reminds me of two different people seeing a happening on the street and comparing notes. One saw a vehicle going way over the posted speed limits and even crossing the center line from time to time and generally being a menace to every law-abiding driver on the roads. The other saw an ambulance rushing to save a life. I wonder how I will see The Shack.

WORK (or writing in this case) - My big project is starting slow. Life's distractions are the enemy of creativity and production. I always wanted to move to Montana by myself and set up a home office to be able to write without distraction. That probably will not happen, but I am determined to carry on nonetheless.

SPIRIT - My common theme for the spirit is and will remain "surrender":

Living one day at a time; Enjoying one moment at a time; Accepting hardships as the pathway to peace; Taking, as He did, this sinful world as it is, not as I would have it; Trusting that He will make all things right if I surrender to His Will; That I may be reasonably happy in this life and supremely happy with Him Forever in the next.

FAMILY - I am getting a little concerned about my mother. The other morning, I found her hours before she normally gets up. She was dressed and ready to go. She was concerned that none of her kids were there to be ready for the party. It took me a couple of hours to convince her that there was no party and that she had dreamed the whole thing. It takes her too long to differentiate between reality and dreams sometimes. She always comes out of it, but exclaims, "It was so real." I wonder if there will ever be a day that she just doesn't come out of it. God forbid.

LOVE - Frankly, I am just avoiding it. I am usually a humble kind of guy, but I am just not going to give love so freely - not that special someone kind of love. The more women I meet, the more I realize that most are not worthy of what I have to give. I am the type of guy that will treat my significant other like a queen. I will spend every day thinking of her first - trying to make her day better, every day. I try to give her a reason to smile on a daily basis. I want her to count on laughter when she's that I am on the phone - especially if she needs that lift. I never allow the prospect that she feels unimportant or unloved. She will never doubt my feelings and affection for her. That is just my nature - the way I think everyone should be. However, I am tired of casting my pearls before the swine. I am just not going to do it anymore.

ANGUISH - My tenant! Actually he moved out, had the power turned off, but didn't tell me any of it. He still has stuff in there - some of it valuable. However, he hasn't paid for October, let alone November. I am going to have to change the locks.

SPORTS - I am setting up an office/gym in my house. I also bought a Wii Fit. I am going to be healthy if it kills me. I finished well in the contest at work. Clothes that I couldn't have worn at this past summer are falling off of me now. Guess how I did it? That's right, I surrendered.

HOME - I think I kind of covered this already in other headings. Things are shaping up and will be great as soon as I get that TENANT OUT OF MY LIFE!TT

I feel you on the mom thing. My MIL is in the early stages of Alzheimers and it's a little strange. We've had to go looking for her before - she went to the store to buy an onion and when she didn't come back for two hours, we went looking. She had a full cart of groceries - and no onions.

It's kind of scary. We thought my mom was starting to have problems too, but it turned out that she has sleep apnea, which was making her fuzzy and forgetful.

I'm glad your tenant is out - what started out so promising really did turn into a headache, didn't he?

Oddly, I get a sense of things working out for you. Perhaps you can't see it yet, but the pattern is starting to emerge. Just keep doing what you're doing... Someone's watching out for you upstairs!

From a legal standpoint, do you still have to go through the eviction process in your state? What a.....well, I won't say what I think of him:)

get your mom to a doc! I knew someone a while ago who went through the same thing. Be sure she doesnt endanger herself. On the love thing, take your time..when you are ready it will come and you will be ready. (I repeated myself, sorry)

p.s. same blog, but I ahve a different url